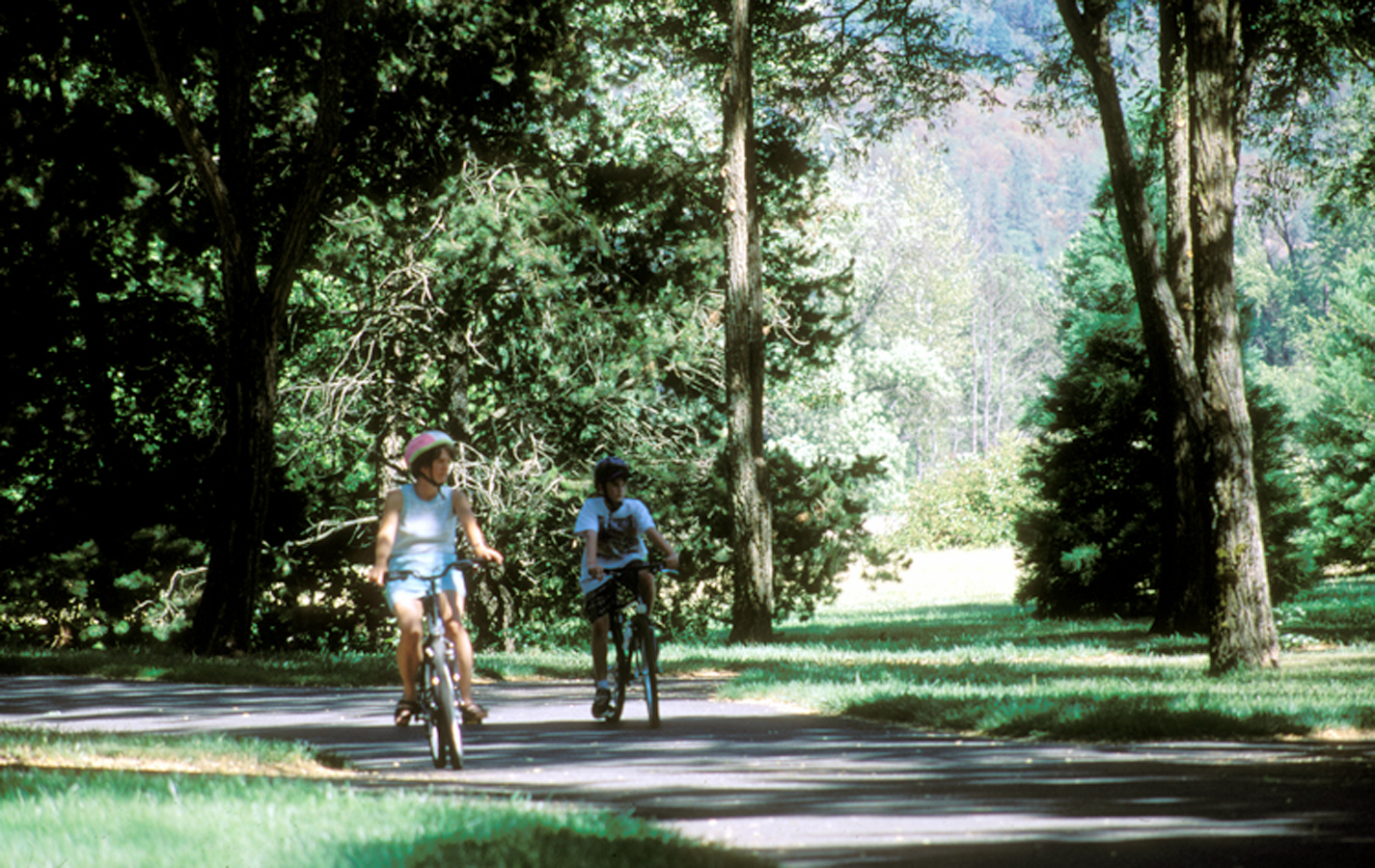 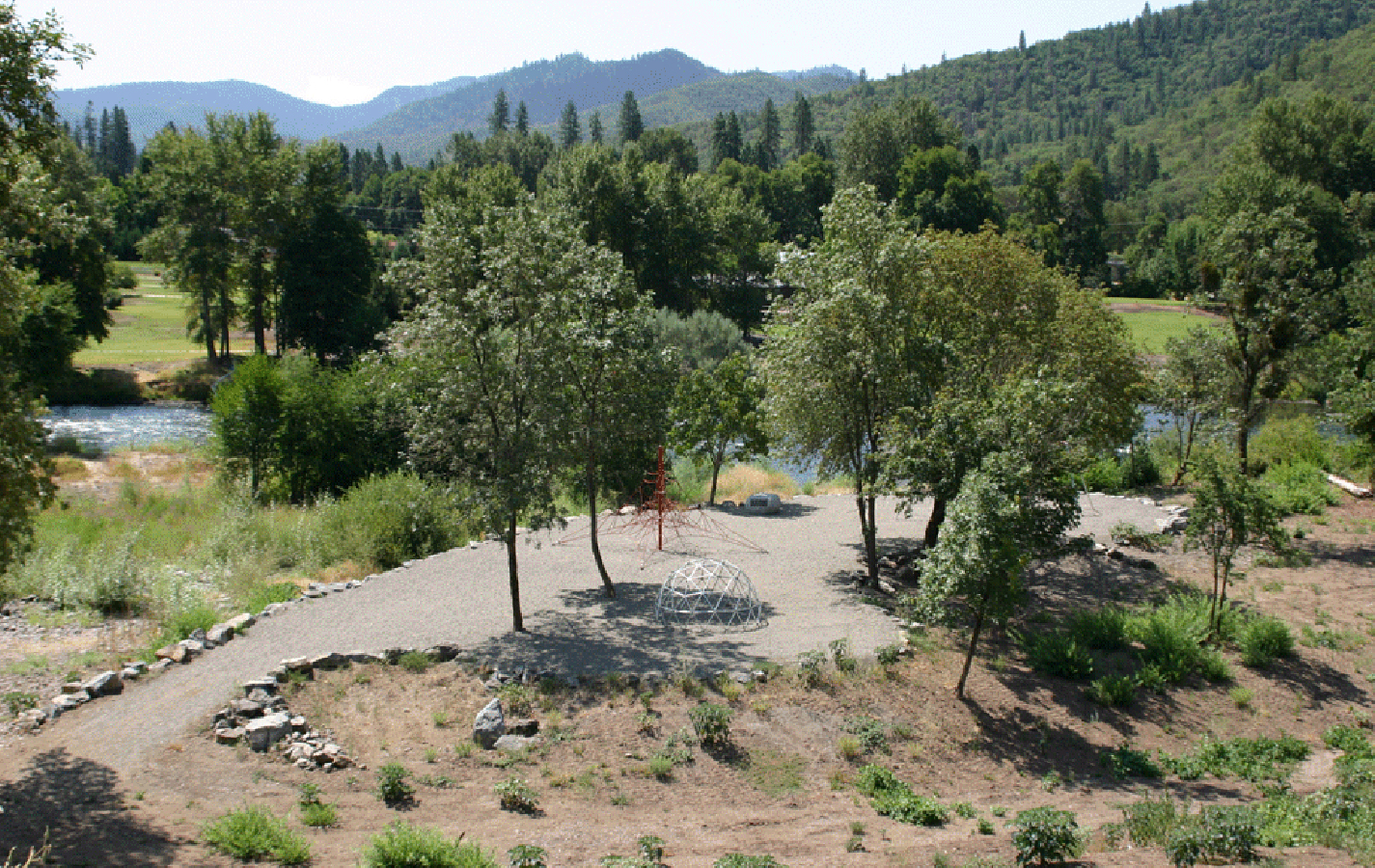 The first priority of the Rogue River Greenway Project is to create a safer environment for families and seniors to enjoy healthy outdoor activities such as walking and cycling.  Currently there are very few safe places for our children, adults and seniors to walk or bike without competing with vehicular traffic.  In areas where the greenway is complete, local volunteers called “The Trailmasters” are patroling the trail in walking groups and with a golf cart generously donated by the city of Phoenix, Oregon.  The various local City Police Departments, the county Sheriffs and Oregon State Police all do their part within their jurisdicition to support this effort.  There is no place on earth that will always be safe and without its periodic issues but the communities can do thier part by simply their presence and by reporting any vandalism or suspicious activity to the local police.  Would you look the other way while someone vandelized your front yard, of course not.  This is the people’s greenway and a possibility of a bad apple showing up should not be allowed to prevent the project from being built or enjoying it once it is.  The best message you could send to potential vandals is if they come to your area that the eyes and ears of the community are paying attention and they will be caught and prosecuted should they try.

Walking, jogging, bicycling, and roller blading are but a few of the available recreational activities along the greenway.  By establishing numerous river front parks and public access areas we hope to promote fishing, kayaking, and rafting on the Rogue River.  The Nugget Wayside area, one of the potential greenway parks, is frequented by world class kayakers and is known for the White Water Rodeo event.  Areas along the Gold Ray & Upper River Roads portion of the Recreational Corridor also provide excellent equestrian opportunities.  The Rogue River is one of our most valuable resources but currently it is one of the least publicly accessible rivers in the State of Oregon.  We hope to provide additional access and promote healthy, affordable, outdoor recreation for residents and visitors of Southern Oregon.

There are currently no alternative non-motorized transportation routes between Grants Pass and Central Point.  When you combine this with the fact that there are no existing public modes of transportation between these points, you can see how strategically important this Greenway project is to the area. A majority of residents that live in these communities work in the Medford and Grants Pass areas and many would likely take advantage of and utilize a trail facility to commute to work.  Additionally the Valley of the Rogue State Park, located between the Rogue River and Gold Hill communities, boast over 100,000 visitors and 25,000 campers annually that would now have a scenic trail to access both communities promoting alternative modes of transportation, helping to stimulate the towns local economies and create jobs.

By safeguarding and enhancing natural resources the Rogue River Greenway offers the rural communities in Jackson County, which have suffered financially from the downturn in the economy, an opportunity to be revitalized by the economic benefits from tourism.  Dollars from recreation and tourism will help support local economies without devastating effects to the environment.  There are likely to be new business ventures sparked by the visitors and residents utilizing the trail, enhancing existing businesses in the towns as well as the rural businesses like the Del Rio Vineyard located midway along the trail between Gold Hill & Rogue River.  There is a strong likelihood of the development of whitewater kayaking and equestrian trails and support services along the Rogue River within the Gold Hill- Rogue River portion of the Greenway.  This low impact activity has the potential to enhance the economic vitality of the Communities of Gold Hill and Rogue River.

As Oregon currently has one of the highest unemployment rates in the nation, creation of jobs is one of the many benefits the Rogue River Recreational Corridor and Greenway has to offer. We anticipate the Rogue River Greenway creating many new jobs between the three communities through construction of the Greenway, service oriented – trail maintenance, bike rental shop/s, tourism related jobs, kiosks, event related jobs, additional recreation related jobs – fishing, kayaking, rafting. Additionally, jobs created from increased visitors/tourists traffic for motels, restaurants and other service industries as well as to our State Parks.  Some visitors to these communities may discover this is a great retirement location and relocate here then buy or build a home creating even more job opportunities.

The Rogue River Recreational Corridor and Greenway will enhance economic development opportunities for Jackson & Josephine County.  Greenways and bike paths have been identified as one of the top three enhancement strategies for attracting and retaining new business and industries to communities. The most easily recognizable economic benefit of greenways is manifest in higher real property values.  Greenways have contributed from 5 to 20% to the value of homes and properties located adjacent to greenways. In turn, these increases contribute to tax revenues that help offset greenway acquisition costs and trail development. Greenways are major tourism attractions and keep tourists in the area longer which has huge revenue implications. Completion and connection of a major greenway system in southern Oregon will enable smaller communities to tap into the national tourism base enjoyed by Ashland and the regional health & retail market in Medford, creating economic parity for the entire region that will last for years.

The data is in (some listed below in Health) and it is not pretty about the decline in our childrens health and fitness coupled with an increase in obesity levels.  Economic challenges have all but eliminated school sports programs or turned them into “pay to play” sports leaving many children out in the cold especially those in lower income underserved areas.  We all know that a healthy fit student is more likely to excel in school than one that is not – it is plain and simple common sense.  Since the funding of school sports and/or Physical Education isn’t likely to find full funding anyday soon there must a safe viable alternative for kids to get outside, stretch their legs and get excercise.  The greenway provides that place and what better way for kids to get excercise than riding a bike in a beautiful natural setting!  Most of us grew up riding bikes on top of having PE classes during school and afterschool sports too. This generation of children deserves no less however until that happens at the very least they will have the greenway.

The Rogue River Recreational Corridor and Greenway will play a vital educational role in creating greater public awareness of the importance of maintaining a healthy ecosystem.  The Rogue River and Central Point Schools Districts as well as the Southern Oregon ESD recognize this trail system as providing a source of education about the flora and fauna of our area and the ability to observe the delicate balance of nature effecting the birds, wildlife and fish spawning in one of the most valuable treasures in our State, the scenic Rogue River.  The value of this is underscored by the listing of Coho Salmon on the endangered species list.

With 70% of the population living within 1-2 miles of the Rogue River Greenway, the completion of the Rogue River Recreational Corridor and Greenway will provide far reaching benefits for the region’s citizens.  From Central Point to Grants Pass including the Cities of Rogue River and Gold Hill, all are poised to utilize the Rogue River Greenway to benefit their local economies.  Central point is bustling with new growth and is considered a “family” community that will now have access to the entire trails network at their doorstep.  Additionally all cities along route will be able to capitalize on being the “Gateways” to the Rogue River Recreational Corridor and Greenway.  Connecting to the 20 mile Bear Creek Greenway will establish a “regional” 50+ mile long greenway from Grants Pass to Ashland.

Regular physical activity is good for overall health. Physical activity decreases the risk for colon cancer, diabetes, and high blood pressure. It also helps to control weight, contributes to healthy bones, muscles, and joints; reduces falls among the elderly; and helps to relieve the pain of arthritis. Physical activity does not have to be strenuous to be beneficial. Moderate physical activity, such as 30 minutes of brisk walking five or more times a week, also has health benefits.

Despite all the benefits of being physically active, most Americans are sedentary. Technology has created many time and labor saving products. Some examples include cars, elevators, computers, dishwashers, and televisions. Cars are used to run short distance errands instead of people walking or riding a bicycle. As a result, these recent lifestyle changes have reduced the overall amount of energy expended in our daily lives. Obesity is of great public health concern, because it is directly related to diabetes, hypertension, osteoarthritis, and other chronic conditions. Moreover, obesity, as well as other conditions for which it serves as a major risk factor, is highly prevalent in all groups of the population.

“Oregon is in effect, the second hungriest state in the nation and we also have this growing problem of obesity,” stated Senator Wyden. “In our state, the two are clearly linked.”

Obesity and Environment: People may make decisions based on their environment or community. For example, a person may choose not to walk to the store or work because of a lack of sidewalks. Communities, homes, and workplaces each shape health decisions. With fewer options for physical activity and healthy eating, it becomes more difficult for people to make good choices. The Surgeon General’s Call to action to Prevent and Decrease Overweight and Obesity 2000 identified action steps to prevent and decrease obesity and overweight.

A Change of Habit: Promoting healthy lifestyles to prevent obesity in a community or region involves the creation of a healthy environment.  The first step is to provide safe, easy, affordable access to recreation areas.  The Rogue River Greenway will provide our communities with their first step to creating a healthier lifestyle for our children, adults and seniors.

Environmental awareness and accessibility creates an appreciation for the beauty and wonder of our area as well as promotes good stewardship of our lands.  Air quality is one of the serious issues facing Jackson County which has the most stringent air quality guidelines in the State of Oregon.  We have attached an air quality assessment showing the positive effect that the Rogue River Greenway will have on the CO and PM10 particulates within the Rogue Valley Corridor.  For pedestrians and bicyclists county wide, the Rogue River Greenway will provide a safe and environmentally sound alternative to automobile transportation.

There are many ways you can help. We need volunteers for landscaping, patrolling, engineering, and more.
Click here for details.

Please make a donation today – every dollar/volunteer makes a difference.

The Rogue River Greenway Foundation is a 501(c)3 non-profit organization and contributions are fully tax deductible to the extent provided by law. #14-1907756. NOTE: Any checks for donations/sponsorships/registrations need to be made payable to Rogue River Greenway Foundation, using the memo area to indicate Ride the Rogue or other reason. This is at the request of our bank, due to increased security policies.